Hello Dorchester! Did you know that Dorchester is home to twenty-five of Boston’s Public Schools? Many of these schools are all named after real people and, here on Caught in Dot, we’ll be examining who these people are. One of the schools, the Lilla G. Frederick Pilot Middle School, is named after community activist Lilla Frederick. Frederick, who passed away in 2005, was a vital force in the Grove Hall neighborhood. Mayor Tom Menino once said this about Lilla Frederick, “She was one of the anchors of the community who made the city better for all of us. She was a voice of reason and compassion.”

Mrs. Frederick was born in Kingston, Jamaica and earned her Bachelor’s Degree in Business Administration at Northeastern University and her Master’s Degree in Management from Lesley University. She lived in the Grove Hall neighborhood for 30 years, and, at the time of her death, was the President of Project RIGHT (Rebuilding & Improving Grove Hall Together)​. The mission of Project RIGHT (or PRI) is to create, nurture, establish, strengthen, mobilize and coordinate resident and youth involvement in neighborhood stabilization, economic development and community building efforts within the neighborhoods of North Dorchester and Roxbury (Greater Grove Hall) through the grassroots organizing of neighborhood residents.

The Lilla G. Frederick Pilot Middle School wasn’t always named that though. It was originally going to be called the New Brunswick Gardens Middle School, a name culled from the patch of land it was built on. But at the time, it was feared that the school wouldn’t be embraced by kids from different neighborhoods. Boston school officials then started to refer to it as The Columbia Road Middle School but stopped calling it that after they learned there was a street gang who went by the name “Columbia Road.” The school was opened with the name “The New Boston Pilot Middle School,” holding the name for two years. So dull!

After Lilla Frederick unexpectedly passed away in early 2005, area residents suggested the school be renamed after her; fortunately for all of us, the Boston School Committee agreed in December of 2005. According to the Boston Globe, Lilla Frederick, “was the driving community force behind designing the school on a vacant lot so dangerous that Menino called in the National Guard in 1996 to clean it up.” Seems only right that the school be named after her!

The Frederick is a public school but it is also a “pilot school” and that means it administers state and district required tests, but that the school has the flexibility to determine its own curriculum. A pilot school has the freedom to choose what’s best for its students. As Lilla Frederick once said, “We have turned blight into right, scars into stars.” 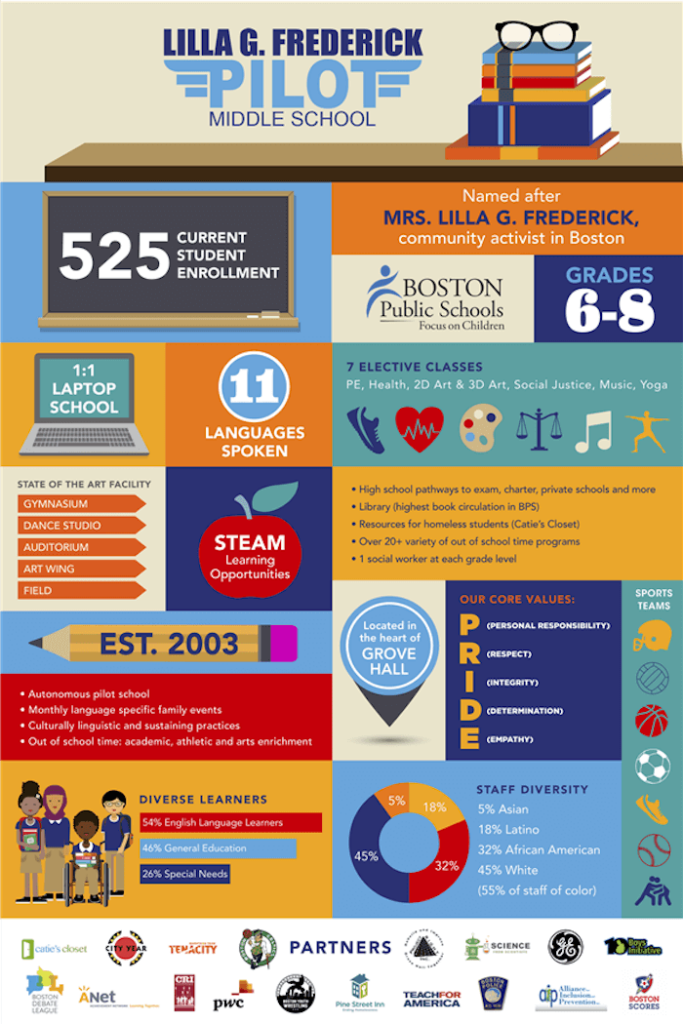