Beach Water Quality Report from Save the Harbor/Save the Bay

Save the Harbor/Save the Bay released their annual Beach Water Quality Report Card on the Metropolitan Region’s public beaches. The report card is based on water quality data collected during the 2020 beach season on 15 public beaches in 10 communities, including Lynn, Swampscott, Nahant, Revere, Winthrop, East Boston, South Boston, Dorchester, Quincy and Hull.

In Dorchester, Malibu and Savin Hill has the cleanest water in the neighborhood with 70%-73% compared to South Boston beaches – right next door with 92%-100%.  Tenean Beach came in last with the poorest quality, although the water has improved over the past few years.  Hmmm, wonder if the poor quality of Tenean’s water has anything to do with Quincy’s shenanigans. 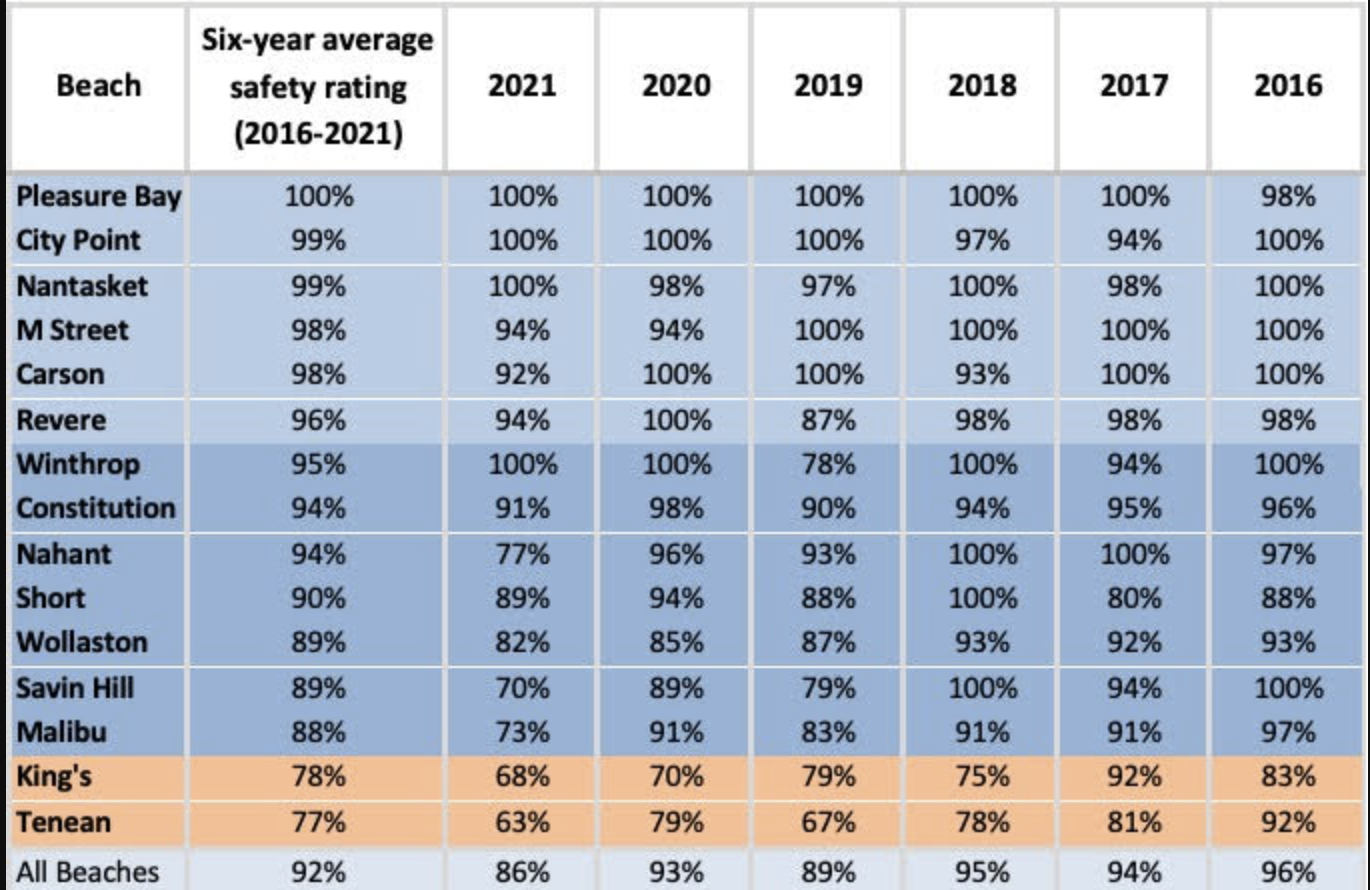 In 2021, the overall water quality safety rating for the Boston Harbor’s region’s beaches managed by the Department of Conservation and Recreation was 86%, down from the previous year’s score of 93%.

Rainfall has a significant impact on water quality on many beaches and varies substantially from year to year. In 2021 there were far more rain events in the region than in 2020, with 19 storms exceeding a half-inch of rain, 12 of which exceeded one inch of rainfall.

These seasonal variations are why Save the Harbor/Save the Bay is reluctant to draw conclusions from results for individual years, preferring to rely on multi-year averages in evaluating overall water quality on the region’s public beaches.

Despite the wet weather, Pleasure Bay and City Point Beach in South Boston, Nantasket Beach in Hull and Winthrop Beach had perfect scores of 100 % in 2021, while five area beaches scored between 82% – 94%.

“Considering the wet weather, most of the region’s beaches scored quite well, earning A’s and B’s” said Save the Harbor/Save the Bay’s Executive Director Chris Mancini, who noted that King’s Beach in Lynn and Swampscott and Tenean Beach in Dorchester continue to lag behind.

“Sadly the Department of Public Health’s beach posting and flagging protocols failed to make the grade again this year,” said Mancini, noting that 75% of the red flags that flew on Constitution Beach in East Boston in 2021 were wrong while an astonishing 100% of the red flags on that beach were incorrect in 2020. “We believe that there are better ways to provide timely and accurate information about beach water quality to those who need it most and would like to work with DPH and other stakeholders to get it right.”

According to Mancini, this problem is exacerbated by the fact that, though most of DPH’s website is available with Google Translate, their Bureau of Environmental Health beach water quality locator is still available in English only, though many beach goers primarily speak other languages in their home.

Rather than wait for DPH to update their website, Save the Harbor has posted the FAQ’s from and a link to the DPH site on their blog “Sea, Sand And Sky” here, where they can be easily translated into more 100 languages using Google Translate.

According to Save the Harbor’s Director of Strategy & Communications Bruce Berman, “Working together we can provide more accessible, timely and accurate water quality data to beachgoers, improving public access to the beach and better protecting the public’s health.”

According to Berman, this year Save the Harbor conducted a detailed study of Constitution Beach in East Boston to determine the accuracy of posted swimming advisories and beach flags and plans to evaluate other Metropolitan beaches using the same data review process.

“On many beaches, simply installing an accurate and accessible rain gauge and making the information available online in real time with a QR code would provide better information. We can – and should – do better than the current system, which relies on yesterday’s results and are a terrible predictor of today’s water quality.”

Save the Harbor/Save the Bay thanks Dr. Judy Pederson, former Chair of their Beaches Science Advisory Committee, for her guidance in developing the methodology used in this report, and Kelly Coughlin of Stony Brook Partners and Save the Harbor’s Environmental Policy Assistant Caroline Adamson who were instrumental in producing this year’s report card.

They also thank the Baker/Polito Administration, Metropolitan Beaches Commission Co-Chairs Senator Brendan Crighton of Lynn and Rep. Adrian Madaro of East Boston as well as Senate President Karen Spilka and House Speaker Ron Mariano and each of the legislative and community members of the Metropolitan Beaches Commission for their commitment to clean water and the region’s public beaches from Nahant to Nantasket.

To learn more about Save the Harbor/Save the Bay and the great work they do to restore, protect and share Boston Harbor, the waterfront, islands and the region’s public beaches with all Bostonians and the region’s residents, visit their website at www.savetheharbor.org and follow @savetheharbor on social media.