See report below from tpdnews.com

On October 9, 2019 at approximately 5PM a 60 year old male, who needs a cane to walk, was viciously assaulted and robbed by several males after a verbal exchange. The offending males ripped the cane from the victim’s hand causing him to fall to the ground were he lay helplessly while being kicked, stomped and robbed. Julius Tolbert, 47, of Hyde Park was identified as the subject who kicked the victim and stomped on his ankle. Tolbert was placed into custody and transported to TPD HQ.

Transit Police detectives are currently investigating the identities and whereabouts of others involved.

5-year old found safe after being kidnapped in Dorchester 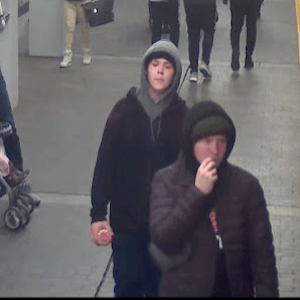 MBTA Transit Police need your help in identifying these two.