Total Wine, in its bid to present Boston community support for its proposed South Bay alcohol superstore, has actively solicited non-Boston residents to sign its City of Boston Licensing petition.

First reported by the Boston Globe, “over 400 people have signed on in support after Total Wine promoted the petition on the Facebook pages of its stores elsewhere in Massachusetts.”

Total Wine is asking non-Boston residents in the towns across Massachusetts to sign the petition to open its store in Dorchester.

Using the company’s local Facebook pages in the towns of Shrewsbury, Natick, Burlington, Danvers, and Everett, Total Wine is asking its customers to write to the City of Boston Licensing Board to try to influence their alcohol license permitting process. 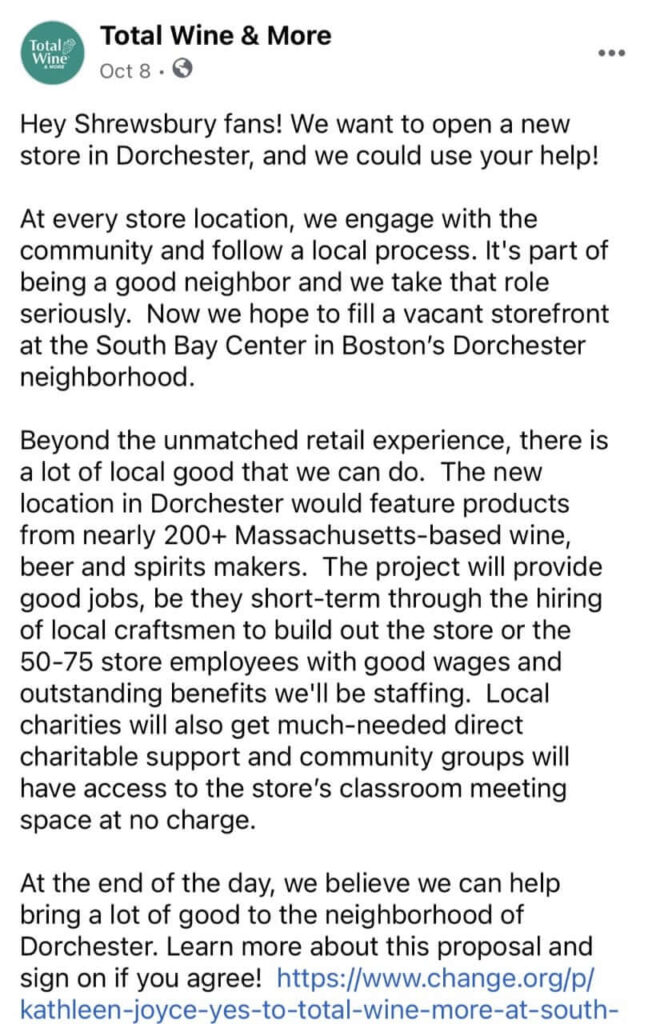 Stand with Boston small businesses and residents. Tell the City of Boston Licensing Board that there is NO public need for a liquor license in South Bay Shopping Center.

In response to the proposed Total Wine Alcohol Superstore, a coalition of residents and businesses have formed the Save Boston Small Businesses coalition. Opponents to the Total Wine alcohol superstore can now register their opposition in an online petition. You can sign it here!

Sponsored Content – Paid for by the Save Boston Small Businesses coalition