What started as a fist fight between two men, ended with one of them jumping off of a bridge early Friday morning.

According to Mass Live, a fight broke out between two men on top of the Beades Bridge  on Morrissey Blvd. When the BPD arrived, one of the men jumped into Dorchester Bay.

After searching for several hours, police and fire rescue crews discovered the man had safely swam to shore and was currently at work in Norwell.

“Eventually, the state police were able to contact the gentleman we were looking for,” Acting Deputy Chief Erik Pettaway said in a video by a Boston 25 news reporter. “He had gone in the water, got out, went home and went to work. So he’s presently at work.”

Evidently, Massachusetts State Police had spoken to the man’s friends and contacted him at his workplace.

Just after 4:30 a.m. on Friday, BPD began searching the area near Malibu Beach along Dorchester Bay for two people who reportedly jumped into the water from Morrissey Boulevard.

According to BFD, a report of a person missing in the water at Malibu Beach was a false report.

At a news conference on Friday morning, Boston Fire Acting Deputy Chief Erik Pettaway that after searching, there was no person in the water. 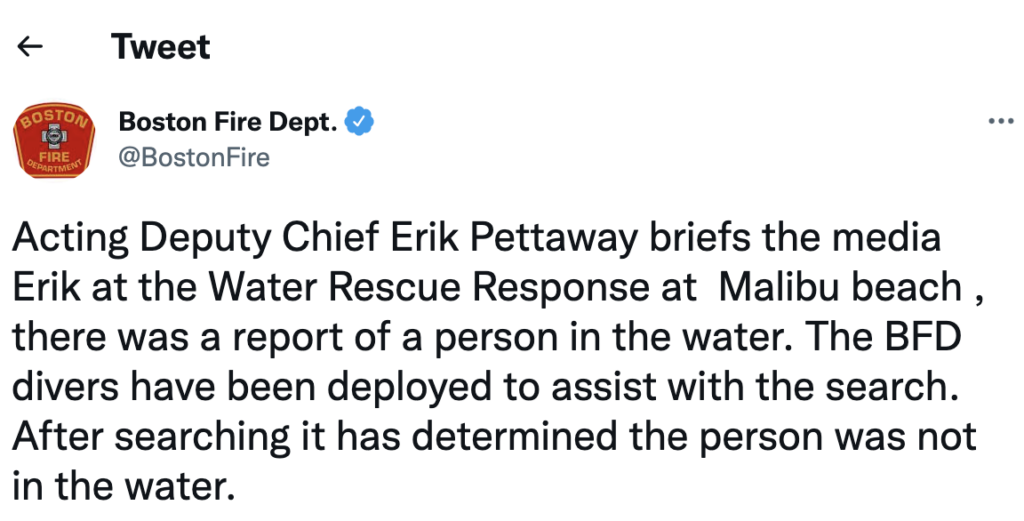 The search closed two lanes of the Morrissey Boulevard Bridge.