Hello friends!  It’s your girl Heather and I’m here to talk about local restaurants and watching the ol’ boob tube – these are a few of my favorite things.  This Halloween I plan on curling up with something spooky to watch and delicious takeout from one of my favorite local eateries…I just don’t have it in me to dress up as a sexy Mare of Eastown, going out on Halloween in a young woman’s game!  Ok now that I have addressed the elephant in the room of me being too old to go out on Halloween, let’s get to the food and movie pairings!

I think I write about Alfred Hitchcock’s The Birds every year, and I’m going to keep writing about it until all of you watch it.  This Halloween, show those nasty fowl of Bodega Bay who’s boss and order chicken under a brick from dbar.  Not so smug now, are they?

Remember the movie The Ring?  It was about a haunted VHS tape but I’m sure any day now we’ll get a reboot about a haunted ring light (BTW I’m not 100% sure what the difference between a reboot and a remake is but that’s another post for another day, as is my hatred for the Home Alone reboot/make).  There’s really only one possible option for what to eat while watching The Ring, onion rings – get it – onion RINGS! The Industry has a Beer Battered Onion Rings as an appetizer and they’re delightful. As an aside more restaurants should have onion rings because they are delicious.

While there is no shortage of pumpkin dishes (and drinks!) this time of year, my personal favorite is Capo’s pumpkin ravioli.  I’m not typically a ravioli person (I don’t vibe with ricotta), but Capo’s combo of pumpkin, brown butter jus, pecorino, and sage is always welcome in my mouth.  The perfect flick to watch with pumpkin ravioli?  Friday the 13th!  Just kidding, it’s obviously Pumpkinhead, unless it’s family night, then it’s It’s The Great Pumpkin, Charlie Brown.

Speaking of family night, I really love the movie Coco even though it makes me cry.  Like cry-cry, ugly tears, heaving sobs.  If anything can soothe my sobbing soul during a Coco watch, it’s churros and birria tacos from Yellow Door Taqueria.  Churros are in the movie, birria tacos are not they’re just delicious and I want to eat them every day.

I have personally never seen The Rocky Horror Picture Show in a theater and if I’m being honest it sounds like a nightmare and I would rather sit through Palm Sunday mass in wet jeans, but I know a couple things!  For instance, I know they throw toast at the screen; and crostini is just bougie toast, and I think eating 224 Boston Street’s burrata with crostini on my couch sounds like heaven.  So The Rocky Horror Picture Show and 224 Boston Street it is.

Whatever you feel about Practical Magic as a film, you have to admit it has perhaps the most iconic margarita scene in all of cinema…you know where this is going, right?  Margaritas from Loco and honestly what food you get to go with them doesn’t even matter.

I am “I saw Beetlejuice in a movie theater years old’, and let me tell you, it freaked my eight-year-old ass out!  It’s a miracle I can even eat shrimp cocktail today!  Miracles happen every day so let’s get some shrimp cocktail from The Broadway and watch Beetlejuice…oh no, I’ve said his name twice!

While we’re talking about movies that messed me up as a kid, how about Poltergeist?  Most people probably think of Marty peeling his face off, or Carol Anne in front of the tv when they hear Poltergeist, but as someone who’s always been a little food focused, I think of that steak scene.  Pretty ga-rose.  Not gross enough to deter me from eating steak, and I will celebrate my steely resolve with steak tips from The Playwright and maybe a brownie sundae because I can have it all!

Ok maybe you want more than just an hour and a half movie?  Maybe you want to hunker down for a day (or two) and watch a creepy tv show?  I’m going to suggest you go all the way back to 1990 and take a trip to Twin Peaks.  Twin Peaks checks all the right boxes; creepy, campy, sexy, soapy, and there’s even an episode directed by Diane Keaton!  You can watch just the original run, or add on the movie and/or the later Showtime series, Twin Peaks The Return.  However, you decide to do your Twin Peaks marathon, I suggest pairing it with Publico’s damn fine Coffee and Donuts dessert. 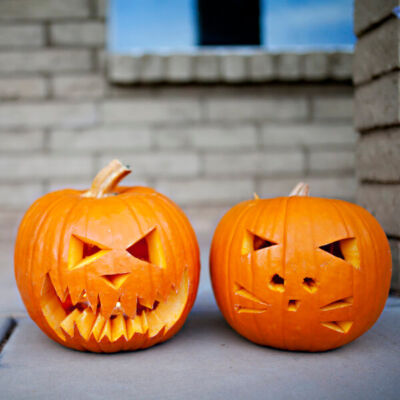 Halloween Fun in the Neighborhood