If you love chocolate you might be interested to know there was a time it would have been produced right here in the Lower Mills neighborhood of Dorchester! And that chocolate is the subject of this History Lesson!

As you remember from previous History Lessons, Dorchester was its own town and settlement by Europeans started in the 1630’s.  Dorchester had something very special that helped its growth – the Neponset River. Especially the rapids which provided something super important – water powered mills! At first grist, paper, and wool mills but later CHOCOLATE!

Side note: What exactly is a grist mill? Basically, it is a mill where grains are ground. The word “grist” meant cereal grains to early American settlers.

An Irish immigrant and local businessman, John Hannon, the help of Dr. James Baker, a Harvard grad, started to import cocoa beans and grind it into chocolate in the 1760s; they called their endeavor Hannon’s Best Chocolate. In 1779, John Hannon mysteriously disappeared during a cocoa bean buying trip to the West Indies and his widow sold the whole company to Baker in 1780. Baker renamed the business The Baker Chocolate Company. Generations of the Baker family created the first chocolate industrial area in the United States – the very first!

It’s hard to think about Dorchester without electricity but back in the 1700s, there obviously, wasn’t any. The rapids in the Neponset River powered the mills but there was no refrigeration. Chocolate could only be made in the colder winter months and the mills would produce other products at different times of the year. But in 1869 a member of the Baker family built a mill with underground cooling rooms which allowed them to continue making chocolate in the summer! Year chocolate round in Lower Mills!

At the business’ height they were producing 5 tons of chocolate A DAY in Dot! Whoa!  Baker’s main product was unsweetened chocolate, what you think of as baking chocolate. But they did produce other sweetened chocolates in addition to hot cocoa mixes!

The Baker family sold the company to the Forbes Syndicate in 1896, and the Syndicate kept the Baker name and production in Dorchester.  They even expanded and by the 1960’s, Baker occupied over 14 acres in Lower Mills. But by the 1960s the company was owned by General Foods and they decided to close the Dorchester factories and move the operation to Dover, DE.  Sadly, by 1965, Baker was completely gone from Dorchester.

Baker’s Chocolates still exist today though. You can buy it just about anywhere, you can even order it from Target! Baker Chocolate Company is currently owned by the giant conglomerate of Kraft Heinz.

The 14 acres in Lower Mills sat empty for a long time but eventually things were redeveloped. Today you can even live in one of the old factories! A one bedroom starts around $2500 a month! The mills and the factories are even recognized by the National Register of Historic Places as the Dorchester/Milton Lower Mills Industrial Complex. The area is thriving with restaurants and coffee shops and people! Lots of people who, hopefully, bake with Baker’s chocolate in homage to the Baker family! 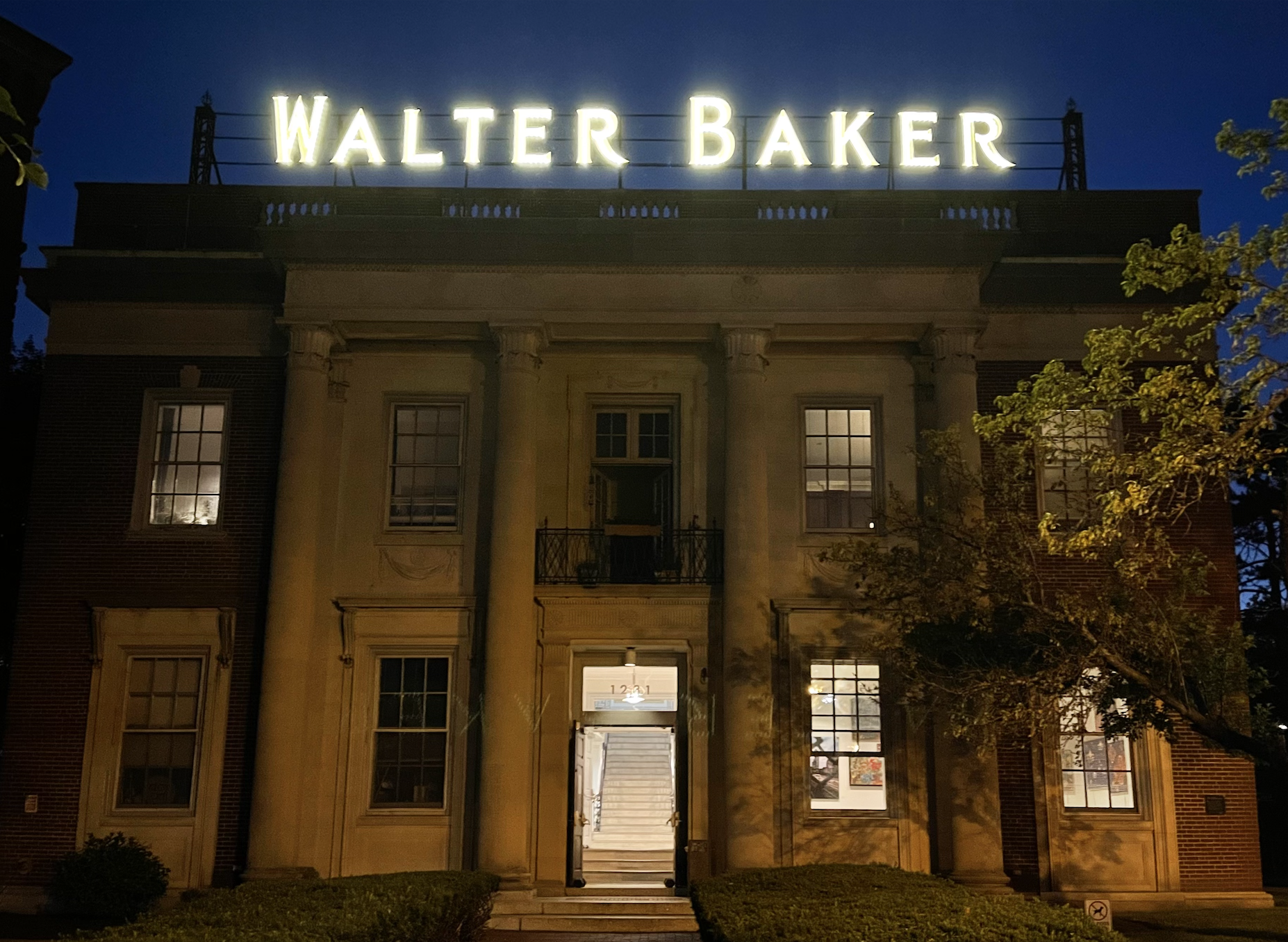 After 56 years of darkness, the landmark sign on top of the Walter Baker chocolate factory administration building was finally illuminated!

According to a feature in the Boston Globe, the executive board of the Dorchester Lower Mills Civic Association came up with the idea and applied for the Community Preservation Fund to finance the $66,000 project!

A few months back, a crane removed the letters to be restored and then were recently reinstalled with the ability to light up!