Dixie the Cat has been found!

Calling 2020 a “challenging” year would be an understatement, normal bad situations seemed magnified by the cumulative negativity of this year. So, when a bright spot in this otherwise bleak year shines upon us it puts things in perspective about the inherent goodness in people and why we are going to emerge stronger as people when the madness of 2020 ends.

On November 7th, our bengal kittens Dixie & Jojo got out of the house from an accidentally left open door, Jojo was quickly recovered, but Dixie was not so lucky. We fervently searched the neighborhood , posted signs, and contacted the shelters, used pet locaters, neighborhood apps, and a A wonderful Caught in Dot post and everything else one could think of to find and create awareness of a lost pet. Dixies exotic spots and cute face aided a lil but too. 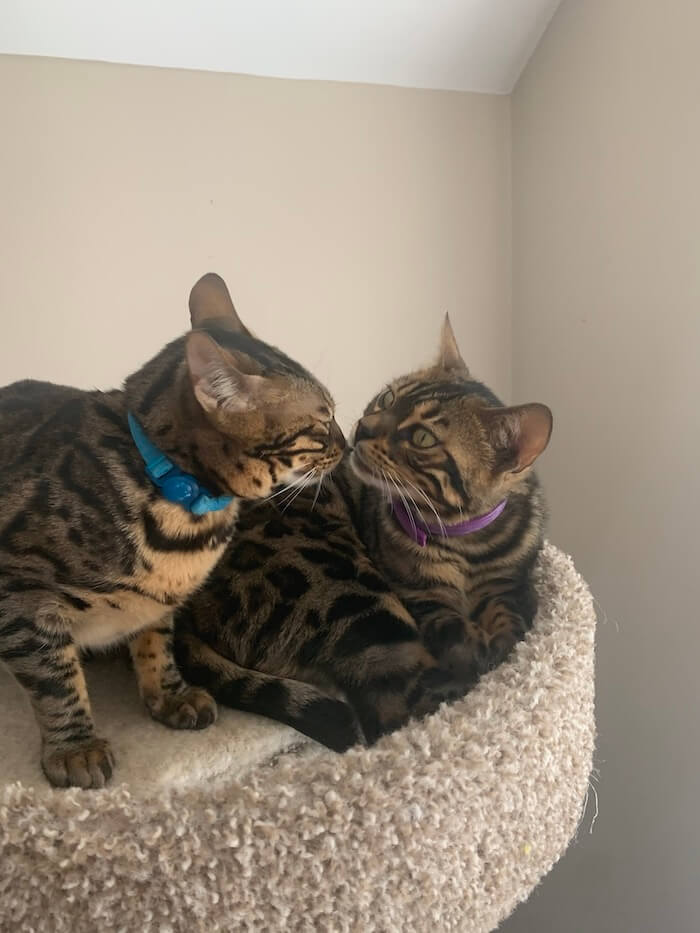 As the initial days of optimism faded, we were struck by the kindness and optimism of those who learned of Dixie’s disappearance. Whether through social media or in person, the kindness of strangers and they sincere hope that Dixie would be found buoyed our spirits.

As the days wore on, it was tough not feel as though we would never see her again. But, then a potential sighting would occur and we would search for her, playing cat sounds and shaking her favorite food. At all times We could feel the hope of those monitoring the search for Dixie and their disappointment when it turned out to be a dead end. Yet this determined group continued to search.

A number of sightings of a Bengal type cat was reported in the Eversource utility parcel across from Florian Hall, one morning at about 6AM a utility worker called the phone on our poster stating that he found Dixie. We raced down and it was a cat resembling her but not her…The look of disappointment in the mans face was empathetic as he tried to convince us outta sheer hope that it was her and that we might be mistaken. Again the kindness of strangers was evident to us. This little kitty was uniting people in concern for her return and it was truly heart warming.

After that the Dixie leads dried up and we started discussing accepting that we may never see her again. Her sister would never cuddle together before their naps and chase each other around and wrestle. We also felt responsible for leaving a door open and even though we knew it to be an accident, the heavy burden of blame sneaks into your mind.

As November turned into December and the one month anniversary of her going missing came and went the bleakness of her situation became increasingly dire. As the forecast of a large snow storm approached we worried if that might be the last challenge that she could survive if she was in fact still out there.

Then on Tuesday evening December 15th (A.K.A. day 38), a call from Willard Vet Clinic came. “Hello we have a Good Samaritan here that found Dixie, she was in Quincy” we scanned her chip. The rush of joy and emotion flooded over us and we raced into the car! As we drove to Quincy without an actual destination we realized we needed an address. The woman gave her address and a few moments later we were reunited. She was dirty, smelly and had a big tick biting into her, but she was alive!

We profusely thanked the hero and her happiness and sincerity was like all those we had encountered over the last 37 days…just genuinely concerned and happy to help another person in need.

We talked with the vet the next day and she put into perspective the harrowing nature of survival that Dixie endured the last 37 days and how truly amazing it was for her to be alive. We like to think even though she was isolated and alone she knew so many people were rooting for her survival.

Although we all feel a little isolated and alone in the present state of the world, this experience has taught us two really valuable lessons. Don’t ever give up hope and if you need help, just ask…people are good.

On behalf of Dixie, thank you for your kindness and well wishes!

Dixie is in the pink collar